Our site search has led the MN Cycling Center to the Historic Shoreham Yards roundhouse property at 28th Avenue and Central Avenue NE in the heart of Northeast Minneapolis.  This historic transportation hub has a legacy that dates to the late 19th Century.  In an interesting parallel, the earliest sections of the Roundhouse were built at the same time as Minneapolis was hosting the first international 6-day bicycle race in the 1890s.

From the City of Minneapolis:

[frame_box]Located on the southeastern corner of the Shoreham Yards, the Roundhouse was first constructed in 1887. Between 1887 and 1919, the semi-circular red brick building grew from 18 stalls to 46 stalls. Originally serving as the storage space for steam locomotives, the roundhouse was converted to a service station, lockers, and general storage after the conversion to diesel locomotives in the 1950s. The Roundhouse at Shoreham Yards acted as the central hub for the Minneapolis, Sault Ste. Marie & Atlantic Railroad company (referred to as the Soo Line). The Soo Line Company, under its first president William D. Washburn, started as a grain transportation system which contributed to much of the success of the milling industry in Minneapolis. The roundhouse was once the epicenter of the railroad repair yards and provided employment for people who lived in Northeast Minneapolis.[/frame_box]

We are excited to revitalize the Shoreham Yards property and bring new life to the historic Roundhouse. 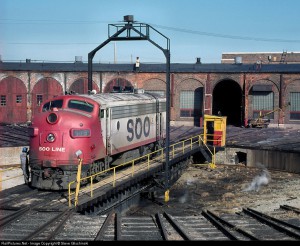 A Soo Line locomotive takes a spin on the turntable at the Shoreham Yards roundhouse in the 1970s.